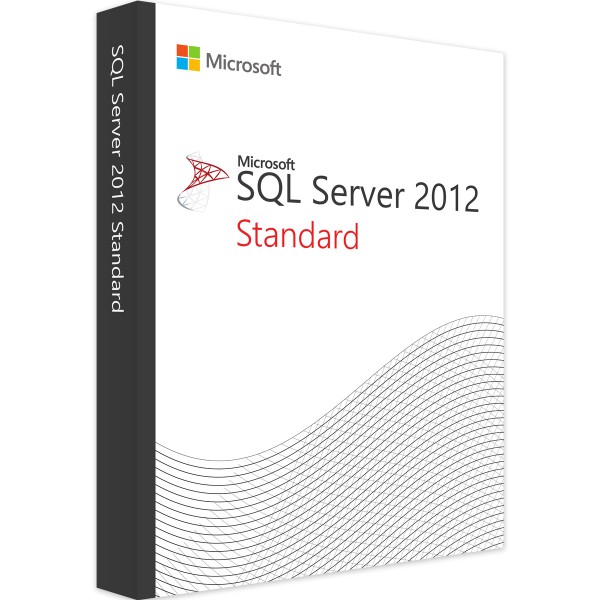 Whenever a lot of data has to be moved and required, the SQL Server 2012 Standard 2 Core comes into its own. The popular and proven solution has offered numerous features for many years and is still well suited for the years to come thanks to direct cloud integration. Of importance is the right core licensing so you can start using it right away. You can buy the product SQL Server 2012 Standard 2 Core at BestSoftware for a low price, including always a top service by our experienced and trained experts.

SQL Server 2012 Standard 2 Core brings many attractive features for effective work. Rely on a mature concept and significant improvements that clearly come into their own in the professional environment. It is important to distinguish between the variants, as the SQL Server of 2012 is fundamentally offered in three different versions. These are the Enterprise, Business Intelligence and Standard versions. The Standard version is primarily aimed at smaller companies, but still offers enormous performance. All basic database and BI functions are part of the program's fixed equipment.

For example, you can rely on the provision of comprehensive service and support. These are among the great advantages of the professional server, because for all problems and wishes, the manufacturer Microsoft has the right experts up its sleeve. They help immediately and provide support if complications should arise. However, data security is also important, especially in a professional environment. For this, the manufacturer Microsoft provides exactly the right features and functions in SQL Server 2012 Standard 2 Core, including security and encryption options. Personal data is thus always absolutely safe and protected from unauthorized access. However, so that you can not only work securely and well supported, SQL Server 2012 Standard 2 Core also offers tools for more productivity. These include the file visualization program, for example. This is available in different variants and makes it much easier for you to analyze personal data. With these, you can have a visual reprocessing of the data carried out, so that you can keep an overview here at all times.

Before you can start working with the server, you need to buy the appropriate licenses for the product. With the new version from 2012, the manufacturer Microsoft brings a completely new licensing concept. You can choose between server licensing including device CALs or user CALs and so-called core licensing.

You will receive the appropriate SQL Server 2012 Standard 2 Cores directly from us at a reasonable price. This type of licensing offers several advantages and perfect possibilities for extensive work. The concept takes into account the increasing performance of modern servers including the corresponding CPUs. So here you no longer license the processors per se, but the individual cores. In principle, you have to buy a license for each provided core. In our BestSoftware online store, however, you always buy the SQL Server 2012 Standard 2 Cores in a double pack. By using the core licensing offered for the standard variant, you do not need any additional licenses. Rather, any number of users and devices can access the server.

Incidentally, licensing always takes place in a double pack, i.e. two core licenses are always purchased and delivered directly with each purchase. Individual licensing is still possible with SQL Server 2012; it was only with the 2016 version that new rules for professional licensing were introduced. You should consider very carefully which type of licenses are particularly suitable for your needs. A subsequent change or a reallocation of the purchased licenses is unfortunately no longer possible.

Our tip: Especially in smaller companies with few employees and low access requirements, the alternative licensing type offered can be worthwhile. Within the scope of this variant, you first purchase a server license so that you are generally allowed to use SQL Server 2012 and then the appropriate CALs, i.e. access licenses for the customers or for the devices. You have the choice between User CALs and Device CALs, both variants can be purchased at a very reasonable price and as an alternative to SQL Server 2012 Standard 2 Core.

In addition to the basic features, there are also many innovations that come into play in SQL Server 2012 Standard 2 Core. These are especially apparent if you, as a user, have previously relied on the server from 2008. Microsoft has optimized in the right places and improved the server to significantly increase the availability of services and data, among other things. This has apparently also been achieved with great success, as a look at the "AlwaysOn" function clearly shows. The SQL Server 2012 Standard 2 Core is always ready for use and provides the necessary data. In case of an emergency, a recovery is integrated. In addition, the manufacturer Microsoft has worked on the performance. Particularly in view of the ever-increasing volumes of data, this is of great importance so that work can continue to go smoothly. A fixed component of SQL Server 2012 Standard 2 Core is now the Azure cloud service, which also comes directly from Microsoft. This is becoming more and more important, especially due to increasing virtualization and the outsourcing of tasks and routines to the cloud networks. So here, SQL Server 2012 Standard 2 Core is perfectly aligned for the coming years and the changed needs of customers.

The one-time purchase of the licenses for SQL Server 2012 Standard 2 Core goes quickly into the money. Therefore, as a consumer, take the opportunity now and buy your licenses from us in the BestSoftware online store at a particularly low price. We have now been providing our customers with very affordable licenses for popular and original software products since 2019, and SQL Server from 2012 is no exception. With the core licenses and the associated SQL Server 2012 Device CALs or User CALs you are also optimally equipped. We deliver especially fast, so your purchase will be available in your e-mail inbox after a maximum of only 30 minutes. If you have any questions about the special licensing of SQL Server 2012 Standard 2 Core or if you are looking for an alternative, for example the SQL Server 2019 or the SQL Server 2014you will certainly find what you are looking for quickly and easily in our well-assorted BestSoftware Online Shop. We are looking forward to your purchase.