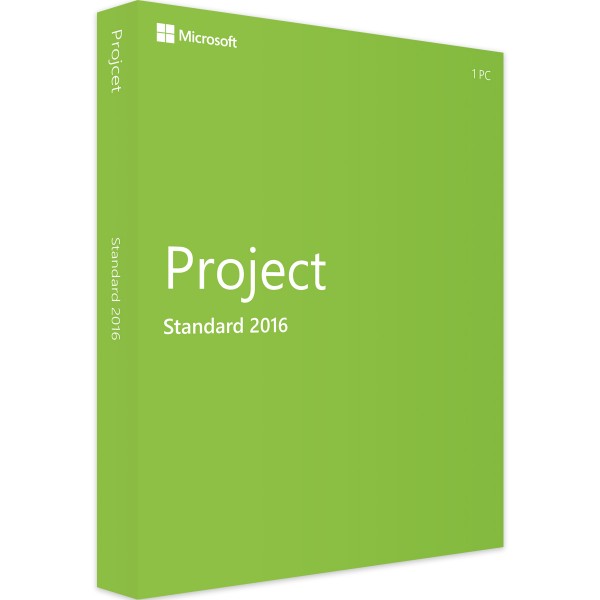 Microsoft Project 2016 Standard is aimed at freelancers, the self-employed and small and medium-sized enterprises. The software solution is not only used to plan and execute projects, but has also been significantly optimized in two other areas. First, Project Standard 2016 allows users to intelligently document all work steps and interim results. Secondly, the software solution offers the possibility to manage multiple projects simultaneously and compare them in the process.

Buy Microsoft Project 2016 Standard: The central features at a glance

The basic functions of Project Standard 2016

The most important functions you are used to from Microsoft Project Standard can also be found in the 2016 version. You have extensive tools at your disposal to plan the use of employees and resources. The same applies to the handling of notified work progress. Costs can be calculated quickly and easily. The software solution allows you to run through various "what if" scenarios to prepare for different circumstances.

Project Standard 2016 offers the possibility to display timelines as parallels. Originally, this feature was primarily intended for planning upcoming projects. However, it can also be used excellently to compare projects. In many companies, it is common practice that certain projects are scheduled again and again with slight variations. For example, websites are redesigned after some time. The parallel timelines make it possible to get good reference points for planning. During the execution of the project, you can monitor whether you are working significantly faster or slower than in previous projects of a similar nature.

Part of the 2016 Microsoft Project standard is also the deep integration of all Office apps. You can easily transfer content from Word, PowerPoint, Excel, Outlook and Co. into the software solution. For example, project templates from Word and Excel can be called up directly from Project Standard. The opposite direction also works: content from the project software can be displayed in any Office app. Presentations of the results using PowerPoint, for example, can be created very easily in this way.

Beginners get an easy start

The design of Microsoft Project Standard is strongly based on that of Office. Those who work with the corresponding apps can also use this software solution without extensive training. This way, newcomers get an easy start. Experienced users who know older variants can work immediately without any problems.

But it's best to convince yourself of all these qualities now!