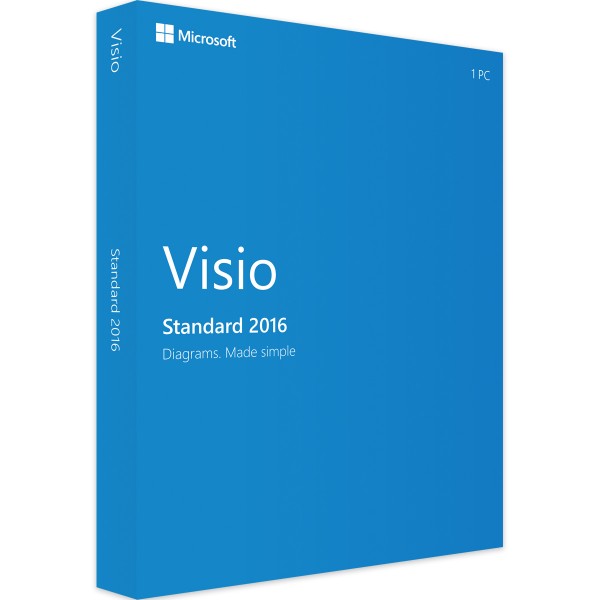 Microsoft Visio Standard 2016 appeared alongside Office 2016, but is not included in any of the popular packages for private, freelance or self-employed users. Nevertheless, this software solution is a worthwhile addition for all users who need to create diagrams on a regular basis. The 2016 Visio stands out positively from older solutions in many ways. At the same time, it also knows how to score points in some fields against the younger Visio 2019 Standard.

Buy Visio Standard 2016 and benefit from these strengths

First of all, the software has numerous new diagram templates. Secondly, new shapes have also been added. For example, Visio 2016 Standard users can now design offices while also visually hinting at the interior design. In addition, seamless collaboration with other Office apps is improved. Diagrams can be easily transferred to all corresponding apps released in 2016 or before. Unlike before, there are now also tips to help beginners create diagrams quickly and efficiently. To make their work easier, the already intuitive user interface has also been further improved.

Visio2019 Standard runs exclusively on Windows 10, whereas Visio 2016 is also compatible with older operating systems. Users who still work with Windows 7, for example, cannot use a more modern edition than the 2016 version of Visio at all. Those who have a computer with Windows 10, but have to pay attention to the price, will also opt for the right solution with Visio 2016 Standard.

Can the diagrams be shared?

Yes, the Visio diagrams can be shared over the network without any problems. The coup here is that this also applies to people who do not have Visio Standard 2016. Those who use Office 365 can also access it via a normal browser. The software solution is therefore not only suitable for companies, but also for pupils and students, for example, who want to work on joint projects over the network and create visualizations for this purpose.