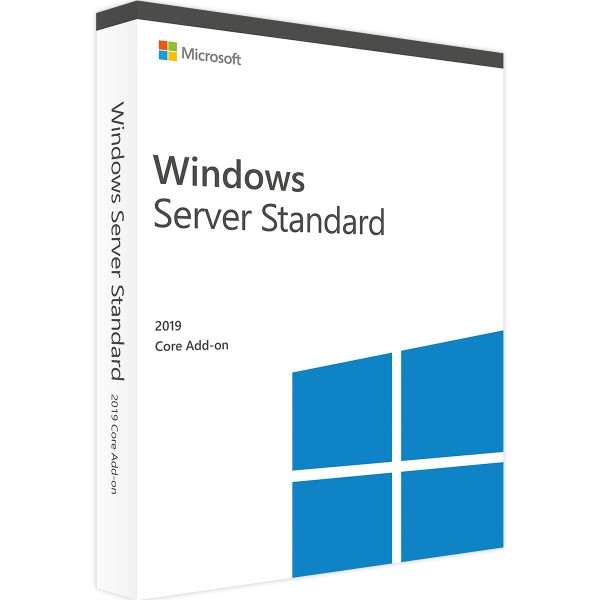 In order to be able to operate a server effectively in everyday life or in a business environment, the right operating system plays a central role. A classic variant of the desktop PC cannot be used here, but many customers also rely on a product from the well-known manufacturer Microsoft in this segment. With Windows Server 2019 one of the particularly popular and powerful variants has been available on the market for several years now. You can order the practical Windows Server 2019 Standard Core Add-on Extension License 2 Core from us in the BestSoftware online store if your needs change and benefit from the simple extension and additional support of further hardware. Take a look at the attractive offer at our online store now and easily take advantage of our numerous benefits.

Windows Server 2019 is among the extra recent and new programs for server system use and administration. The version was released for the first time on October 2, 2018, and from then on it could be claimed either as an upgrade or as a new version. Of course, the manufacturer  promises regular updates for more security and functionality for this popular version and powerful variant as well, and the expected end of support has been announced for January 9, 2029.

With the variant of Windows Server 2019, you as a customer again have different variants and versions in front of you. These are aimed at different target groups and environments. Compared to some predecessors, however, there are now only three versions with Essentials, Standard and Datacenter. The Standard variant. Represents a good compromise between comprehensive performance and modern technologies. The manufacturer Microsoft recommends this version for physical or minimally visualized environments. Licensing is core-based, but additionally requires the corresponding access licenses.  However, the use of the standard version comes with some restrictions, for example, only two virtualization rights for two virtual machines are possible. There are no differences between the Standard and Datacenter versions in terms of hardware support, however; up to 24 terabytes of RAM and unlimited CPU cores are also possible with ease.

With many revisions, Windows Server 2019 is at the cutting edge of technology

Windows Server 2019 is the official successor to Windows Server 2016, and in the years of production, the manufacturer Microsoft has introduced many new functions and features that are intended to provide more productivity and more security, among other things. For example, those who want improved administration will definitely make a good choice with the revised version of the server operating system. The so-called Windows Admin Center is now included. This is a browser-based app. Use it via your server to manage the systems, the clusters or also the Windows 10 PCs in a particularly effective and simple way.

In the 2016 version, the manufacturer brought a good security solution to the systems in the form of Windows Defender for Server, which can provide excellent protection against all common threats. In Windows Server 2019, this service has been revised once again to significantly increase the security level. For example, you can rely on shielded VMs.

In addition, many other smaller functions are included, but in total, they can make your work much more effective. This applies, for example, to a storage migration service, Kubernetes support and failover cluster support. Incidentally, Windows Server 2019 is based on Windows 10, which is the popular operating system from Microsoft. Those who have not opted for the so-called Server Core installation will benefit from a desktop display in the familiar look. This makes navigation in the menus particularly easy and makes it easier for inexperienced users to get started with the daily application. However, many companies have probably also opted for the Server Core installation, which is still offered. Here, the installation is carried out exclusively with the relevant components, a graphical user interface is not included. This offers many advantages, including particularly good performance, as the available resources can be used much more effectively. The security risk is also much more manageable, since the attack surface is reduced by less code.

Start using it with the right licensing for Windows Server 2019

With Windows Server 2016 the manufacturer Microsoft has introduced a new type of licensing for the server operating systems as well. However, the so-called core licensing is not completely unknown, since this is already in use with other server products of the manufacturer. Basically, this type of licensing states that you have to license the individual processor cores of the hardware used so that they can be used. However, core licensing for Windows Server 2019 is based on a total of three rules that must be followed to purchase licenses. For example, each physical processor used in the server is always counted with at least eight cores. In the case of a physical server, it is even always at least 16 cores that are calculated. The third rule now states that physical and active cores must be provided with a core license if the first two rules are observed. For this, you primarily buy the so-called base licenses, which are available on the market in packages with 16 or with 24 cores.

Now, however, the hardware conditions keep changing in the course of usage, for example, by upgrading the servers. In this case, you can resort to the offer of Windows Server 2019 Standard Core Add-on Expansion License 2 Core and purchase it very cheaply from us. Here you can additionally license two new cores and then unlock them for use in the server. This is also possible again and again, so over the years you can always fall back on the Windows Server 2019 Standard Core Add-on Extension License 2 Core and order it.

Of course, we are your reliable and experienced partner when it comes to purchasing the Windows Server 2019 Standard Core Add-on Extension License 2 Core now. Because with us, you don't have to wait long for the products you want, nor do you have to spend a lot of money on the licenses, both of which are points we place particular emphasis on. That's why we take care of the delivery easily and conveniently by e-mail. After the successful purchase you can sit back and relax, after a maximum of 30 minutes waiting time you will receive a message from us with the desired keys for the activation and the subsequent use of the programs. If you have any questions before purchasing the products or if, contrary to expectations, problems arise during installation, we will help you. In this case, simply contact our experienced and friendly staff. We offer you various contact options for this purpose. You are welcome to use the particularly practical live chat, in which we can provide you with quick answers to questions or problems. You can also always rely on a classic hotline or correspondence via e-mail when shopping in the BestSoftware online store.