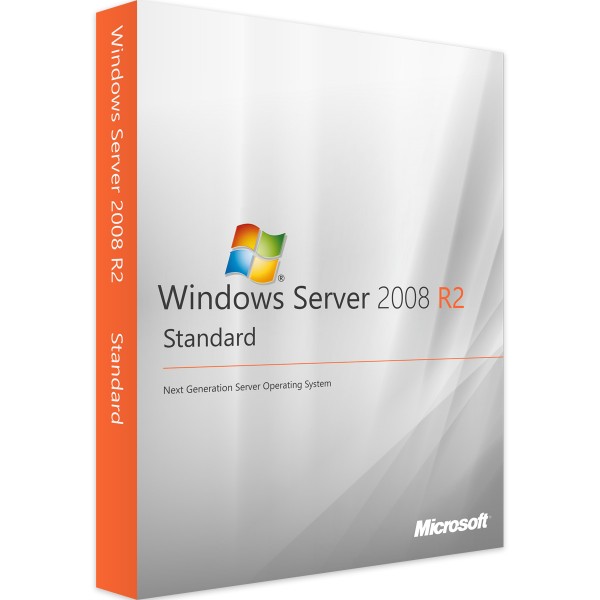 Windows Server 2008 R2 Standard is based on Windows 7 as the server operating system, and this software solution is still considered the best operating system Microsoft has ever developed. Users who buy Windows Server 2008 R2 Standard can see this immediately in the program. It combines great performance with the proven quality that the Windows 7 code vouches for. For the self-employed, small businesses or home users who want to build and run a network, this operating system is therefore an excellent solution.

The classic concern with an older operating system like Windows Server 2008 R2 revolves around whether it can meet modern demands. You do not have to worry about such issues. The software solution handles all pending tasks in a contemporary manner. In the network, for example, it distributes loads to different systems to ensure the highest possible working speed. Various administration modes make it easier to manage the system as well as the network. Active Directory, for example, was developed for this purpose. With Core Server, a mode is available in which the operating system works automatically without a graphical user interface. This is useful if it is to run primarily in the background. It works in this way as efficiently as possible.

Hyper-V is on board in Windows Server 2008 R2 Standard. Users can set up and manage virtual machines accordingly. Individual departments can be assigned their own virtual server in this way, for example. The extensive terminal services ensure that everyday work with the network runs as undisturbed as possible. They take over a large part of the tasks so that users can focus on the important things.

Extensive security measures are on board inWindows Server 2008 R2 Standard. For example, there is BitLocker, a program for data encryption. Network access protection is also integrated. Network Access Protection (NAP) continuously determines the status of the current client computers in order to detect possible problems at an early stage. If this happens, the program sounds an alarm. The firewall, which is also integrated, also fends off the majority of external attacks. If an attack does succeed, the system prevents it from spreading by means of isolation control. As a user, you can easily separate areas to ensure the integrity of your infrastructure in this way.