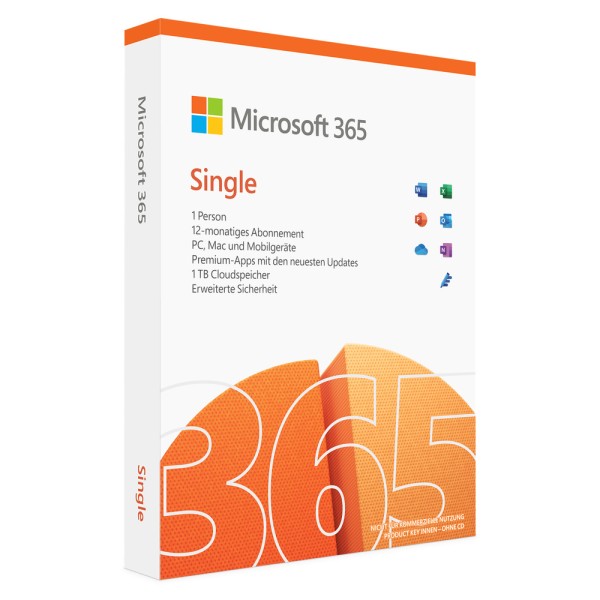 Microsoft Office 365 Single is the ideal solution for private users, pupils, students, freelancers and self-employed persons. All classic Office apps are included in the license. These can be used regardless of device and location. Microsoft Office Single 365 is therefore ideal for working online on joint projects, for example, or for completing important tasks while on the move.

Office 365 Single: These apps are included

Microsoft Office 365 Single is deliberately designed to break the boundaries as set by device classes and operating systems. For example, you can use the apps on Windows and Mac OS. In addition, they also run on your smartphone as well as your tablet. If you want to quickly look up something in a document on your cell phone while you're on the go, Office 365 Single makes it possible that way. These all-round usage options apply to almost all apps that you get with a Microsoft Office Single 365 license. The only exceptions are Publisher and Access. These run exclusively on a PC running Windows.

It's in the nature of things that you want to store as many files online as possible with Microsoft Office 365 Single. This ensures easy access even when you're on the go. Online storage also makes it easier to collaborate with other users who are physically separated. Office Single 365 therefore comes with 1 TB of storage space in Microsoft's OneDrive cloud. If needed, you can still expand this storage space independently of Office 365 Single for a fee.

With Microsoft Office 365 Single, you no longer have to worry about whether you really get the apps in their best version or whether they might be outdated. The developers make all the new features available immediately for Office 365 Single and the other versions of the subscription offering.

You can easily unsubscribe from Microsoft Office Single 365

Do you no longer need the Office Single 365 apps? For example, you have received a license for your home office through your employer? Then you can simply cancel Office 365 Personal . Due to the fact that it is a subscription and not a purchase, you have the freedom to cancel at any time. After the end of the month you have already paid for, it will take effect. Until then, you can continue to use the apps.