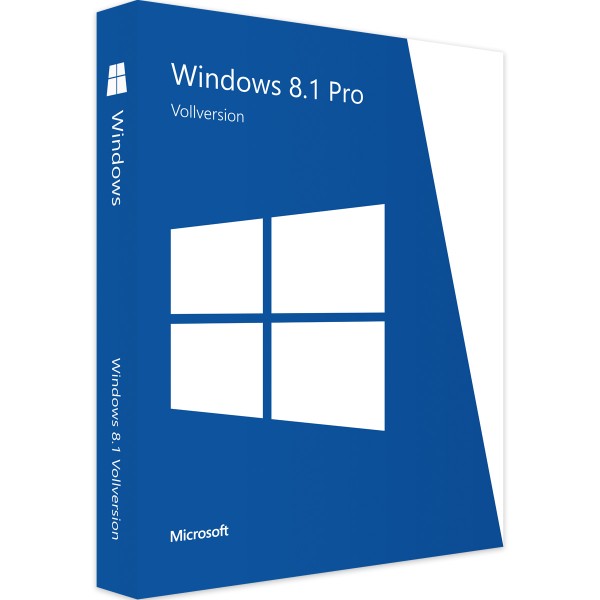 As an operating system,Microsoft Windows 8.1 Professional is aimed specifically at users with higher demands. For example, small businesses, self-employed or freelancers get the support they need for successful work. Especially users who work across devices and/or need touchscreen support should opt for Microsoft Windows 8.1 Pro.

The most important features of Microsoft Windows 8.1 Professional

Microsoft Windows 8.1 Pro: Windows 8 as it should have been from day one

Microsoft dared nothing less than a revolution with the switch from Windows 7 to Windows 8. Start menu and desktop view were abolished as standard view. In their place came a tile design. The operating system also introduced some new features, such as charm bars. In the meantime, it is generally known that Microsoft was praised for its courage, but reaped a lot of criticism for the implementation. Many of the new features were insufficiently explained or not explained at all. In addition, many users wanted the desktop view and the Start menu back. They wanted to have options and not have a design forced on them.

With Windows 8.1, Microsoft addressed these criticisms and proved that it is a company that listens to its users. The Professional version of Windows 8.1 in particular was such a comprehensive overhaul that it is more like a Windows 9. Not only did the Start menu and desktop view come back just like in all other Windows 8.1 editions. Tutorials were also added for really all functions. Professional users can thus use the full potential of the operating system. Seamless cloud support has also been added. This allows you to work on projects simultaneously with colleagues in separate locations, for example.

Microsoft Windows 8.1 Pro offers optimized data transfer. Transfers can be paused and then resumed, for example. Those who work with large data packages know how useful this feature is in everyday use. Also on board is an improved task manager that manages processes more efficiently.

Internet Explorer 11 is also a web browser that has been specially designed for professional users. It supports multitasking very well, for example. Windows 8.1 Professional also allows working across devices. Settings and caches in apps are stored in the cloud and can be used on other devices without any problems.

An operating system especially for touchscreens

Despite all the weak points that the original Windows 8 had - one strength could not be denied: The operating system was superbly optimized for touchscreens from day one. To this day, there is no platform that also runs on desktop computers and laptops that can handle touch surfaces as well as Windows 8.1. Therefore, anyone who works with a corresponding input method, because they work in customer service or use corresponding cash registers, for example, should definitely opt for this edition. You can't work any more comfortably!