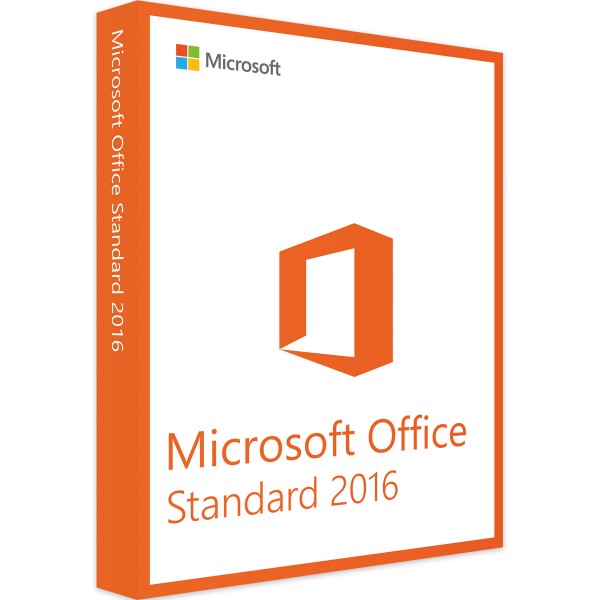 With Office 2016, Microsoft ventured into the modern era. Officially, the software solution was the successor of Office 2013 and Office 2011 for Mac. In fact, however, Office 2016 was primarily based on Office 365, which had been introduced a few years earlier. Users who opt for Microsoft Office 2016 Standard thus not only get access to all the applications they know and appreciate for digital office work. They get a software solution that has been freed from all teething troubles by extensive experience with Office 365. Office 2016 runs stably, is powerful and is compatible with both older and modern operating systems.

Word Create professional text documents in the blink of an eye.

OneNote The digital notebook for manageable and thorough data recording.

Buy Microsoft Office 2016 Standard: The most important features at a glance

Office 2016 has a special unique selling point: It was deliberately designed to work perfectly with all widely used Windows editions. Office 2019, for example, only runs on Windows 10, while Office 2013 (and even older versions) has problems when used with under Microsoft's most modern operating system. However, Windows 7 is still used in many companies and educational institutions, for example. Many private users have Windows 8 or 8.1 on their computers. For such users, Office 2016 is the most powerful and stable solution for digital office work. The standard edition guarantees access to all applications that experienced Office users have known and appreciated for years. Word, PowerPoint, OneNote, Excel and Outlook are all on board.

With Office 2013 and subsequently Office 365, Microsoft has entered the cloud era. People who wanted to edit documents, presentations or even workbooks together in "teamwork" at different locations were supposed to benefit from this. However, the developers first had to learn what was really important. This process was completed with the release of Office 2016. This software solution shows how digital collaboration is done right. The teamwork features, for example, allow documents to be edited together in real time. Documents created independently can be shared instantly with others via the cloud - this is useful, for example, when materials need to be disseminated in preparation for meetings. In the process, sharing can be restricted to specific groups of people. The teamwork functions are also available in all Office 2016 applications - for example, notes or quick notes can also be shared in this way. Office 2016 in the standard edition is thus also the ideal solution for pupils and students.

With Office 2016, Microsoft has also significantly reduced the barriers to entry. Operation has been noticeably simplified with intuitively understandable menus. In addition, the "What would you like to do?" function has been introduced. Users can enter simple descriptions of what they want to do in the corresponding search field and receive direct assistance.

With Office 2016 Standard, Microsoft has also taken account of the fact that users have increasingly high security requirements. This applies in two respects: Firstly, multi-level authentication can be set up for access to Office files. This makes it very difficult for outside attackers to gain access. Secondly, backup copies are automatically created to protect against data loss, which could otherwise occur due to unexpected system crashes, for example.

Our goodwill - your satisfaction!

If we do not have the Office version you purchased in stock anymore, you will receive a higher version without any charge!
Your advantages here are the following: