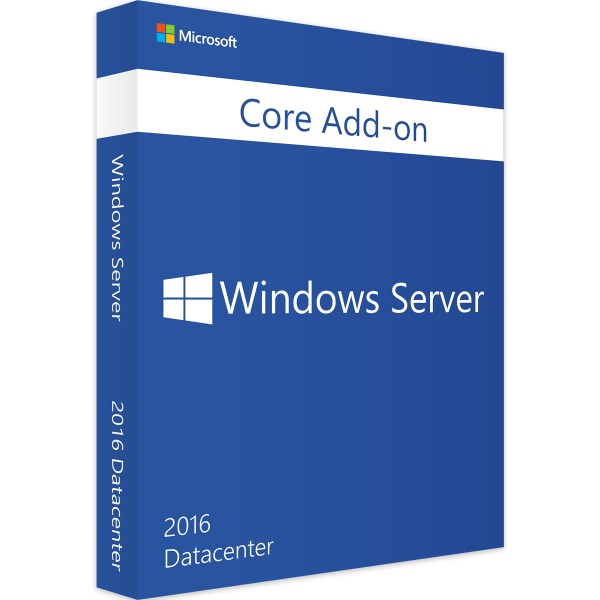 Windows Server 2016 is a popular Operating System for server environments in the professional environment and convinces with numerous powerful tools, easy operation and a very high security level. If the need has changed within the scope of the so-called Core licensing, you can react to the changed need with a practical Windows Server 2016 Datacenter Core Add-on Extension License 2 Core from our range and benefit from extensive use. With the especially low prices and our attractive benefits for the upcoming order, it is always worthwhile to purchase from us.

Windows Server 2016 Datacenter convinces with many functions and comprehensive techniques

Windows Server 2016 is still a popular and powerful operating system for server environments. The system was first released on October 12, 2016 and still receives comprehensive, regular updates that can close existing security gaps, among other things. For example, the manufacturer Microsoft promises support until January 12, 2027, so it is still worth buying a corresponding license today, with which you can install the system on your server.

Windows Server 2016 is a powerful operating system with numerous tools and functions. In direct comparison to its predecessor, you will benefit from some adjustments and important innovations, which can clearly come to bear in the context of everyday use. For example, the manufacturer Microsoft introduces the so-called Nano Server. This is a special installation variant of the operating system. Until now, such an installation in a server environment was always accompanied by high resource requirements. The Nano Server is now supposed to change this and already get by with only 500 megabytes of hard disk capacity. Especially with older and weak hardware, this feature shows its best side.

Windows Server 2016 also brings attractive, important innovations in the area of security. Users can rely on Windows Defender for Servers with this version. The times when a server ran unprotected, at least directly after installation, are definitely over with this powerful program for protection. However, if you don't want to do this, you can disable Defender with a simple command. In this case, however, you should make sure that another program provides the necessary protection for sensitive technology. In addition, cloud support, which was already included in the predecessor Windows Server 2012 R2, is once again significantly expanded with the new version from 2016. This applies, for example, through the Azure Stack function, which is a fixed component of the operating system after an upgrade. Anyone who wants to use a hybrid cloud with optimal scalability, easy integration and very high stability is definitely well advised with Windows Server 2016 Datacenter.

Who with an upgrade from Windows Server 2012 R2 to the 2016 version can also benefit from a so-called Cluster Rolling Upgrade. Up until now, switching to a new version of Windows Server has often involved an enormous amount of work and even downtime for the server. With Windows Server 2016 and the new functionality, these times should finally be a thing of the past. The manufacturer Microsoft promises a particularly easy upgrade, since the cluster can be operated on two so-called different functional levels.

With Windows Server 2016, the manufacturer Microsoft again opts for an elaborate licensing method, although it has been known for several versions. On the one hand, you have to get the licenses for the system itself, on the other hand, however, you also have to get the so-called CALs. Basically, the so-called core licensing plays an important role for you, because it is the basis for the installation and the start-up of the system. Basically, core licensing means that you have to license the individual processor cores of your server for use with Windows Server 2016. This is to ensure that you can use them as needed and in a cost-effective manner. However, you do not simply have to purchase a license for each core now, but you also have to know the total of three important rules for how to proceed.

The first rule states that every physical processor with at least eight cores is counted. This number must also be calculated for a processor with less than eight cores. The second rule also states that each physical server is in principle evaluated with at least 16 cores. The third rule for core licensing now summarizes once again that the physical and active cores must be licensed together. You can purchase so-called base licenses for the processor cores at the beginning and activate Windows Server 2016 with them. These are available with 16 or 24 cores, depending on individual needs.

You have come to the right place if you want to buy Windows Server 2016 Datacenter Core Add-on Extension License 2 Core for your server at a low price. The particularly favorable prices are our focus, but at the same time many other advantages are waiting for you. So if you have any questions or problems with the use of the purchased software, you are always on the safe side with us and you benefit from a competent service as well as a personal contact person. Our employees will help you, for example, via the practical live chat or support you on the hotline. You can also rely on a quick response via e-mail, with this support you are of course particularly flexible. At the same time, you won't have to wait long to claim the Windows Server 2016 Datacenter Core Add-on Extension License 2 Core, as your purchase will be sent via email. After a maximum of 30 minutes, the licenses you want will then be freely available in your mailbox. So take a look at our attractive assortment now and buy Windows Server 2016 Datacenter Core Add-on Extension License 2 Core or numerous other products directly from us and from the comfort of your home.