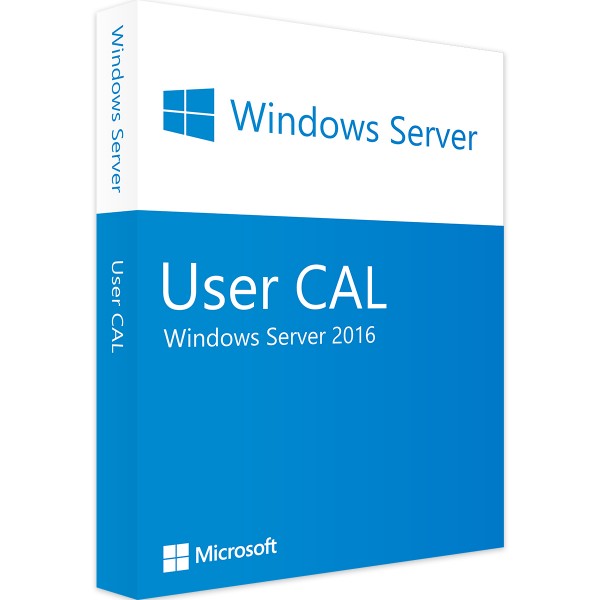 The server operating system Windows Server 2016 includes several new functions and lets you comfortably optimize your IT infrastructure. At the same time, the system works in a resource-saving way and can therefore also be used with somewhat older hardware. Among other things, you can buy the necessary User CALs online via our store to enable users to access the server. With Windows Server 2016 from Microsoft you can use Active Directory Federation Services to manage and authenticate users who are not registered in AD systems. In terms of Remote Desktop, OpenGL 4.4 and OpenCL 1.1 are now supported compared to previous versions.

In addition to the license for the server operating system, you need separate product keys for users and client devices. These licenses are called CAL (= Client Access License) and are required to access the server. A User CAL is bound to a single person, who can access the server with the license via different devices. Whether via workstation computer, notebook or smartphone, access is unrestricted. A Device CAL is bound to a specific device, which may be used by different users. You can purchase the appropriate User CALs and Device CALs for Windows Server 2016 at a reasonable price in our store.

If you buy the Windows Server 2016 User CAL cheaply via our store, users will benefit directly and indirectly from numerous new features. Via Storage Spaces Direct, local hard disks of a Windows Server 2016 cluster can be combined into a single logical pool in just a few steps. This eliminates the need for a storage area network (SAN). The server operating system impresses with better scaling. For example, up to 512 CPUs and 24 TB of RAM can be used on each individual server. For VMs, you can use a maximum of 16 TB of RAM and up to 240 virtual CPUs per VM. Compared to Windows Server 2012 R2, this means a significant performance increase.

Microsoft has integrated some improvements in terms of high availability. With the new "Cluster Operating System Rolling Upgrade" feature, cluster nodes with Windows Server 2012 R2 be conveniently upgraded to Windows Server 2016 without having to accept the loss of server services. During the operations, Hyper-V services and file server shares remain available to users who can access the server through a Windows Server 2016 User CAL. The enhanced version of PowerShell, among other things, enables targeted management of virtual server operating system functions directly from individual host PowerShell sessions. If you purchase Windows Server 2016 online through our store, you can safely, quickly and easily add computers to a network.
Related links to "Windows Server 2016 User"
How does buying software work?
Buy software online at low prices in 3 simple steps: 01.   Buy... more
Close menu