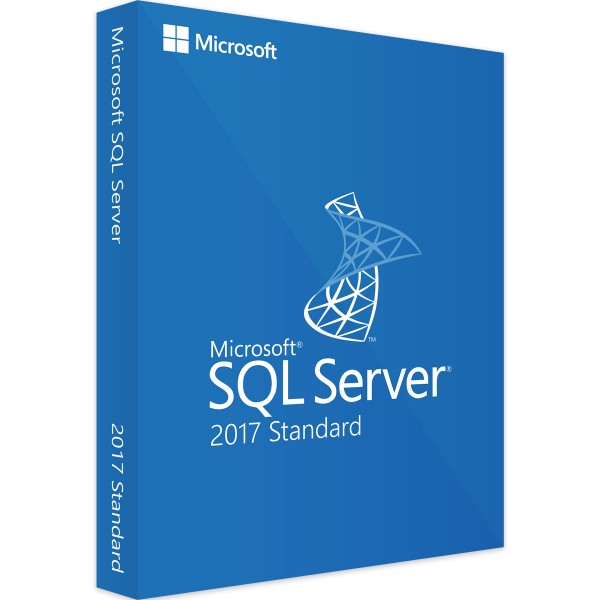 Microsoft SQL Server 2017 Standard is a software solution aimed at small businesses, government agencies, as well as freelancers and self-employed people. It is a powerful database module, which is characterized by compatibility as well as numerous functions, through which everyday work can be made much easier. When you buy Microsoft SQL Server 2017 cheap here with us, you can be sure that you will get a program that works safely and reliably. This applies to both defense against attacks from the outside as well as unintentional data loss.

Buy SQL Server 2017: the most important features at a glance

In large companies, there is widespread awareness of the need to handle data in a professional, efficient and organized manner. In smaller companies, other tradesmen and government institutions, on the other hand, there is often a lack of such insight. When this does come, it is often very difficult to find a solid approach to working efficiently with data. It is precisely in such cases that you should buy Microsoft SQL Server 2017 Standard cheap here with us. Of course, it would be better if you use the software solution as early as possible.

For example,Microsoft SQL Server 2017 Standard allows you to create relational databases. The same applies to the creation of tables, which can be used to manage data objects (e.g. indexes). SQL Server 2017 is also the first generation of this product family from Microsoft to offer extensive compatibility with Linux. In this way, for example, Docker containers actually developed for the open-source operating system can also be deployed on Windows.

With Microsoft SQL Server 2017 Standard, even beginners can manage data after a comparably short training period. For this purpose, the Management Studio serves as the user interface of the software solution. In addition, SQL Server Profiler logs server events of all kinds and alerts you to unusual events. The comprehensive data analysis services that SQL Server 2017 is equipped with also support you in the effort to work with the information as efficiently as possible. Security systems work unobtrusively and efficiently in the background to protect your data. You hardly need to intervene here.

All in all, the software has been tested for numerous workflows in the SME environment and has been continuously optimized on the basis of these results. Therefore, you receive a solution that can support you in your daily work in the best possible way.