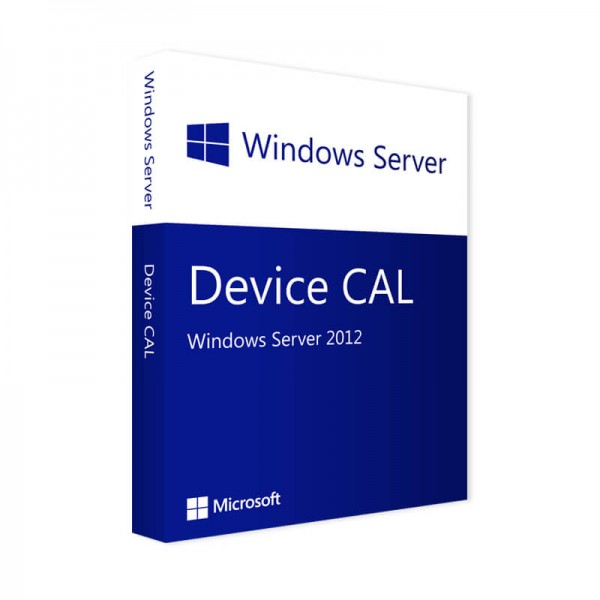 If you want to trust and access the attractive features and functions around Windows Server 2012 in your everyday life, you should buy a low-priced license for access right now. With the Windows Server 2012 Device CAL you will find exactly the right variant for individual work and extensive use in our range. With us you can expect many attractive advantages, for example, very fast delivery of the purchased products within a maximum of 30 minutes by e-mail. With us, you are well equipped even as a professional and excellently equipped for all work in everyday life.

Still a good choice - Windows Server 2012 with many important features

The Windows Server 2012 has now been available to customers on the market for almost ten years, but continues to impress with its attractive advantages. The mature technology, simple operation and many future-proof functions make the server a good choice, especially for beginners, since the acquisition costs for all licenses are significantly lower, especially compared to newer variants.

In addition, Windows Server 2012 again offers the possibility to find the right variant for your individual needs. Choose either the Foundation, Essentials, Standard or Datacenter versions and use the server with the perfect conditions in small or large companies alike. If you still need the right license for Windows Server 2012, you have come to the right place. Here you can get the server license for the popular variant at a particularly low price.

Windows Server 2012 is an operating system for server environments, but at the same time a classic desktop system is used as a basis. Here we are talking about Windows 8the user interface, among other things, is largely taken from this system. Many of the functions known from the classic computer can also be used under Windows Server 2012. This applies, for example, to the installation of alternative browsers or other software solutions. However, the user interface has been slimmed down considerably and, for example, does without different graphic effects or the transparency display in many areas.

With special functions and tools, Windows Server 2012 also sets itself apart from the classic desktop operating systems on the market from a technical point of view. This applies, for example, through a more effective file management, for more printing functions or for features around virtualization. The system is clearly equipped for professional users with corresponding requirements.

If you have purchased the right license for the right Windows Server 2012 edition, you are already a big step closer to using the popular software. However, you also need to purchase the right access licenses for your needs before you can really start using it. You will need these to complement and directly access all the features, settings and more advanced tools. For the upcoming purchase we offer you the so-called Windows Server 2012 Device CAL, which you can buy for a small price.

This is a so-called device-related access license, because the abbreviation stands for Client Access License. With one purchase you can license one device to access the server. In the best case, this is a stationary computer or a terminal device in the company, from which several employees and colleagues can work. In this case, the purchase around the Windows Server 2012 Device CAL is particularly worthwhile. Before ordering the Windows Server 2012 Device CAL, however, keep in mind that you will have to purchase a new license for each new device.

Under certain circumstances, it may be worthwhile to take the alternative, which is the so-called Windows Server 2012 User CAL. This license does not refer to a specific device in the company, but allows a fixed user to work with Windows Server 2012. Here, the choice of the respective device no longer plays a role, this supports mobile working, for example. Access to the server is then also possible from a smartphone or notebook and while on the road. Here you need however for each further coworker or colleague a further Windows Server 2012 User CAL. Consider carefully which of the variants is well suited for you and only then place your order in the BestSoftware online store, as further reassignment is not possible later.

Compared to its predecessor, the 2008 R2 version, Windows Server 2012 offers many innovations and extensive revisions in the right places. This can be seen, for example, when opening the Task Manager. This now appears in a completely new look and also offers technically important news. Opened tasks are now divided into categories and displayed. In addition, Windows Server 2012 is configured in such a way that non-active tasks are terminated directly in the background. This frees up many important server resources and ensures better performance in all situations. A completely newly developed file system is also included in Windows Server 2012, this was specially designed for use in the server area. This is the ReFS system. In the end, it neither supports removable media nor is the format bootable, which also shows the clear demand for use in a server environment.

In addition, Microsoft takes a big step towards future compatibility with Windows Server 2012 and introduces an updated Hyper-V version. This brings, for example, UEFI booting of VMs or an improved copy and paste. Support for Microsoft's Azure services is also significantly expanded. With these, customers can access the manufacturer's cloud infrastructure, use it for their own needs and easily outsource work or files. This makes working with Windows Server 2012 even more effective and individual.

You can always rely on the advantages in the BestSoftware online store. Already today many customers trust us because of the secure and attractive shopping possibilities. This is of course also true if you Windows Server 2012 Device CAL want to secure now. You simply save money with your purchase, especially in comparison to the manufacturer our prices are significantly lower. In addition, we are happy to help our customers with any questions, requests or of course problems and support you to the best of our ability. For this purpose we have created a special live chat, in which we provide you with the necessary support. Alternatively, we offer you a hotline or help via e-mail. In our assortment you also get many other products around the Windows Server, for example the successors Windows Server 2012 R2 or also Windows Server 2019. Also Windows Server 2012 User CAL you can order easily and cheaply. We look forward to your purchase with us and are always there for you.