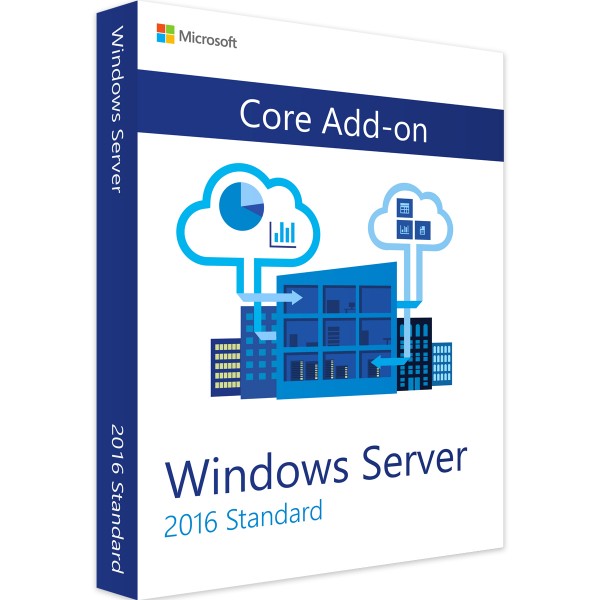 If your needs change and you want to use the full hardware of your server environment, you definitely make a good choice with the Windows Server 2016 Standard Core Add-on Extension License 2 Core. You can easily order the matching add-on offers here at BestSoftware, rely on the numerous benefits and attractive options for relaxed shopping from home.

In order to be able to start with the popular Windows Server 2016 in everyday life, you need to familiarize yourself with the special licensing model in advance. Because since this version, the well-known manufacturer Microsoft relies on the so-called core licensing, which is already used in other areas of different server products. However, you should not simply buy corresponding core licenses for Windows Server 2016, but first study the important rules and notes on this. Here, the first rule states that every physical processor with at least eight cores is evaluated. With the second rule, Microsoft specifies that, in addition, each physical server is rated with at least 16 cores. So, this specifies the minimum amount of licenses or cores that the user must purchase in order to install and use Windows Server 2016. The third rule also specifies that all physical and active cores must be licensed, taking into account the previous two notes.

The so-called basic licenses are available with 16 or 24 cores, depending on individual requirements and the hardware used. So you buy these as part of the first activation when you want to install and use Windows Server 2016. However, as the months and years go by, the need around the licenses may change. At that point, the Windows Server 2016 Standard Core Add-on Extension License 2 Core comes into play. You can buy this extension license for the server operating system especially easily and cheaply from us in the BestSoftware online store, of course you can also buy the Windows Server 2016 Standard Core Add-on Extension License 2 Core multiple times. After a hardware upgrade or a server move, you can then license the active cores again and unlock them for use.

Windows Server 2016 brings with it many technical revisions and practical innovations in all variants. Users who are still working with the predecessor and now want to upgrade can see this for themselves. Up until now, those who wanted to upgrade the operating system had to plan for a lot of time and effort. In addition, this process was often associated with significant downtime. With Windows Server 2016, however, things look different, because a so-called cluster rolling upgrade is possible here. This makes it easy to switch to the new generation of the system while the server is still running. Since the cluster is operated on two different functional levels, this is easily possible with Windows Server 2016 Standard.

In order to prevent performance problems even on older devices, Windows Server 2016 also convinces with a so-called Nano Server. This is a special installation form that is supposed to effectively combat the problem of high resource requirements. The Nano Server runs with only 500 megabytes of disk capacity and can be used effectively. In addition, this special variant ensures better user-friendliness, as updates are needed less often and patches are also less frequent.

Around security, Windows Server 2016 also brings attractive innovations and important features. You can now rely on the new Windows Defender for Servers to be there and watch out right after installation. Because especially after the installation of the server, it is usually unprotected for a certain period of time. With this practical software, the manufacturer provides Microsoft provides an attractive solution, which can provide good protection against all common threats with a very high user-friendliness at the same time. Those who do not want to use Windows Defender for servers, but prefer their own solution, can simply deactivate it.

An improvement in cloud integration, for example through the Azure services from Microsoft, is also included in Windows Server 2016 Standard. Here, the manufacturer Microsoft takes the right path and decides to continue offering virtual solutions with a very good scalability. With further customization and setting options, even more functions and the proven concept, it easily adapts to the needs in your company.

Windows Server 2016 is the official successor of Windows Server 2012 R2 and impresses with attractive features, new technologies and comprehensive tools for everyday work. Microsoft presented the finished and official version to the public in 2016 and allowed customers to directly purchase the necessary licenses. Until today, the specially adapted operating system is used extensively and convinces with a lot of security. This is also ensured by the continued regular updates, which will continue to be made available until at least 2027. So, if you are looking for an inexpensive, yet mature and powerful operating system for servers, Windows Server 2016 is a very good choice.

It should already be known from its predecessors, but different versions and variants are again available in Windows Server 2016. These address different target groups and are characterized by technical features. These are the versions Essentials, Standard and Datacenter. Windows Server 2016 Standard represents the medium configuration level and is well suited for companies that need extended features and also perform virtualization to a lesser extent. This is also shown by a quick look at the virtualization rights. Two virtual machines or alternatively two Hyper-V containers are possible with Windows Server 2016 Standard. The hardware support is extensive; up to 24 terabytes of RAM and up to 512 processor cores can be used.

Incidentally, the hardware requirements for using Windows Server 2016 are again manageable, so using it on older devices is not a problem in principle. However, the system requires a 64-bit processor architecture, and a network card with a minimum throughput in the Gbit/s range should be available in order to use the system's full potential.

Those who want to save a lot of money, but still attach great importance to original and legal licenses, will definitely make a good choice with our offer from the BestSoftware online store. Among other things, this also applies to the Windows Server 2016 Standard Core Add-on Extension License 2 Core, but in addition, we also have many other products for your needs and your technology on offer. For example, access classic licenses for Windows operating systems, among others you buy Windows 11 Pro or Windows 10 Home at particularly favorable prices from us in the BestSoftware online store. But also the other, attractive advantages certainly know how to inspire. For example, as a consumer, you can rely on the very fast delivery of the purchased licenses. You can take advantage of the keys after a maximum of 30 minutes, because the delivery takes place via e-mail. Finally, you may also take advantage of our friendly, competent customer service. With our personal service, we help our customers with every concern and support, for example, via the practical live chat, help via hotline or enable you to communicate effectively via e-mail. So take advantage of our attractive benefits now and order the Windows Server 2016 Standard Core Add-on Extension License 2 Core for your company at low prices from us in the BestSoftware online store.