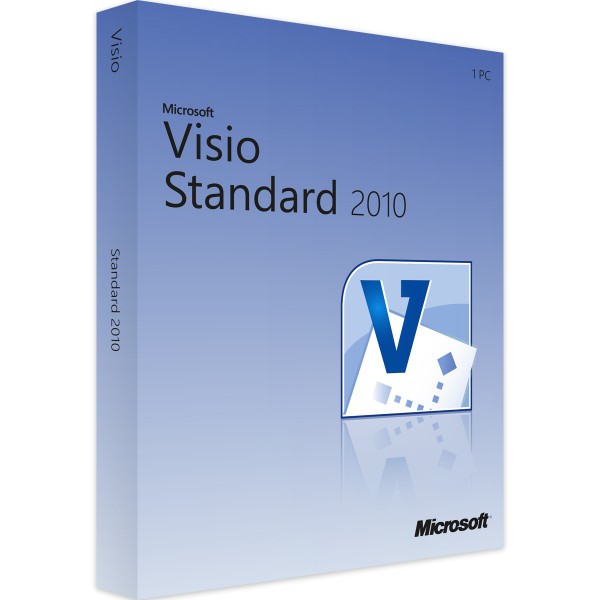 Microsoft Visio 2010 Standard is one of those programs that many potential users don't even know they should be using. Although the software solution is part of the Office family, it is much less widely used than Word, PowerPoint, Outlook or Excel. Yet Visio offers an extremely valuable core capability: complex data sets can be quickly presented graphically, and in an easy-to-understand manner. Users who opt for Microsoft Visio Standard report the same thing again and again: they are amazed at how often they actually need this feature. At the same time, they are pleasantly surprised by Visio's quality.

Microsoft Visio Standard 2010 - the most important strengths at a glance

Who is Microsoft Visio Standard 2010 intended for?

Originally, Microsoft developed the software solution for use in the corporate environment. For example, anyone who wanted to present a project or make suggestions with graphical support should find the right tool in the form of Visio. But the target group soon expanded: Pupils and students, for example, also frequently need to prepare data graphically. Numerous private users also want to be able to show Excel tables as diagrams. Visio is therefore a valuable tool for every user


Is it difficult to get started with Microsoft Visio 2010 Standard?

No, Visio 2010 Standard can be used without any significant barriers to entry. The user interface is graphically based on that of Office 2010 and therefore looks immediately familiar. Commands are sorted by context. You can therefore find the command you are looking for without difficulty. Click paths are also kept as short as possible. For example, it takes only a few corresponding actions with the mouse to import data from different sources


Isn't Microsoft Visio Standard 2010 too old to use anymore?

It is true that there are newer programs. But this is not a disadvantage for this software solution. Visio 2010 Standard, unlike the most modern versions, also works with older operating systems. It requires comparably few resources, is inexpensive, has all core functions and has been freed from all bugs by years of development.