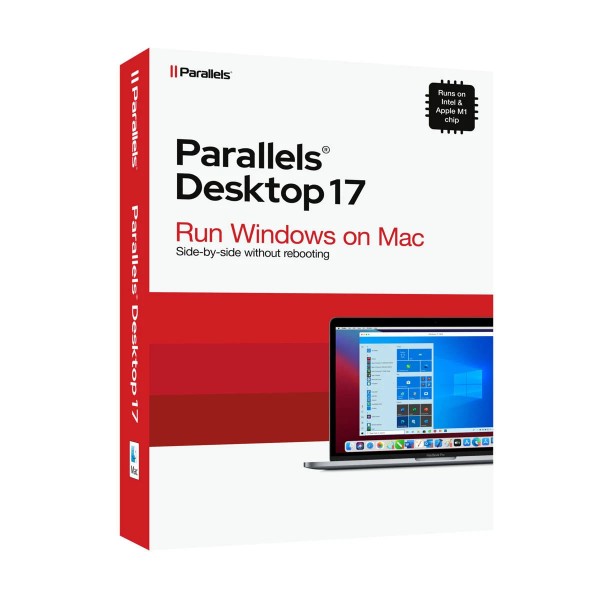 This product is currently not available.

The Parallels Desktop 17 features at a glance

- Support for Windows 11 and macOS 12 Monterey

- Performance improvements across the board

With the Parallels Desktop 17 license, you can transform your Mac into an even more impressive tool that knows virtually no limits and combines multiple operating system worlds. Office applications such as Microsoft Access and Microsoft Publisher, which are not available as a dedicated Mac version, can be easily used with the virtualization software. Graphics-intensive games and CAD programs for Windows can also be used on the Mac without performance degradation. When you buy Parallels Desktop 17 Standard from our store, you benefit from perfect Mac integration. A single Windows app can run directly in macOS and alongside other Mac applications. Thanks to this Parallels Desktop 17 Standard feature, you can work completely uninterrupted.

Compared to its predecessor, you can expect significant performance improvements. Windows 10 will resume up to 38% faster, and booting Windows on M1 will also wow you with a speed increase of up to 33%. Gamers with Apple M1 chips will appreciate the up to 28% increase in speed for DirectX 11 applications. When you purchase Parallels Desktop 17 Standard, you'll enjoy up to 25% faster 2D graphics, optimized video playback, higher frame rates in games, and smoother response time in the Windows user interface. Text as well as graphics can be dragged and dropped effortlessly between Mac and Windows applications. Thanks to USB 3.1 device support, modern super-speed storage can be used in the virtual machine without any problems.

Buy Parallels Desktop 17 and use a proven technology

For over 15 years, the fast, powerful and user-friendly desktop virtualization software has been under continuous development. This is noticeable on the one hand through outstanding reliability, and on the other hand through an impressive number of supported guest operating systems. The new Resource Manager feature monitors virtual machine utilization and can automatically allocate resources, such as memory and processor cores of the host Mac, as needed. The Linux virtual machine can now be used in full-screen mode on multiple monitors with Parallels Desktop 17 Standard. Parallels Desktop 17 Key opens up new software solutions and thus new possibilities.